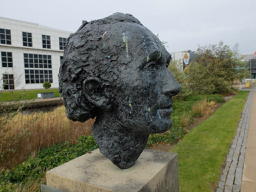 It’s almost a quarter century since the death of Norman MacCaig, on 23 January 1996.

MacCaig is often thought of as a poet of remote places – Assynt and Harris, in particular – but he lived and worked most of his life in Edinburgh, and the city features in many of his poems, including these lines on the Scottish Parliament building’s Canongate wall: 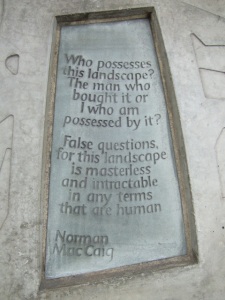 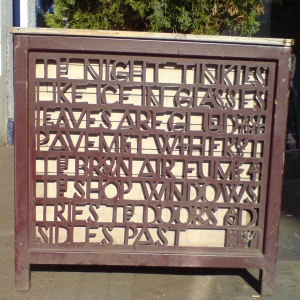 I’ve just come across ‘Drop-out in Edinburgh’ from his collection The World’s Room (1974), in which the sounds of the city are neatly summed up as

… warpipes and genteel pianos
and the sawing voices of lawyers.

That poem articulates the city’s opposites as “caves of guilt… pinnacles of jubilation”. In an earlier poem, ‘Out from a Lecture’, having bemoaned the dullness of lectures and book-learning, he is heartened by an everyday epiphany:

The High Street sticks his elbows in my ribs,
Lifts up a dram of shopfronts; shuts that book.
– And I raise my little glass where like a cherry
The sun’s stuck on a chimney-stack, and drink.