This Edinburgh Alphabet features poems (and some prose) about the city; I’m posting it on Facebook in July and August. I’ve taken the idea partly from J.F. Birrell’s book  from 1980, which I came across by chance recently in an Oxfam bookshop; and partly from the exhibition currently running at the City Art Centre.

A is for Auld Reikie

Edinburgh’s cramped and densely populated Old Town was known as Auld Reikie (‘Old Smoky’). The poet of its bustle and vapours was Robert Fergusson, who wrote in both Scots and English, but it’s for the Scots work that he is best remembered; his longest poem ‘Auld Reikie’, captures the sights, sounds and smells of the city he lived in.

He died in 1774, tragically young, and was buried in the Canongate Kirkyard. beneath a stone commissioned by Robert Burns. Today on the Canongate, David Annand’s bronze statue of the poet, book in hand, walks beneath the cherry trees. At his feet are inscribed the opening lines of ‘Auld Reikie’.

B is for Burns

Robert Burns (1759–1796) was born, grew up and farmed in Ayrshire. His Poems, Chiefly in the Scottish Dialect were published to acclaim in 1786, and he travelled to Edinburgh at the end of that year hoping to find a patron. He was welcomed and celebrated, but disappointed in his hopes; eventually he had to take a job as an exciseman to achieve a measure of financial security.

While in Edinburgh he arranged for a stone to be erected in the Canongate Kirkyard for the poet Robert Fergusson (1750–1774), who had been buried there in a pauper’s grave. Burns knew and admired his work, and wrote this epitaph for his stone:

Ironically, Burns himself was memorialised in ‘sculptur’d marble’ by the citizens of Edinburgh. In 1824 John Flaxman was commissioned to produce a life-size statue of Burns in white marble, and a monument was built to house it, designed by Thomas Hamilton. If Fergusson lived in Auld Reikie, after his death the city become known as the ‘Athens of the North’, thanks to such buildings as Hamilton’s neo-classical Royal High School. As his template for the nearby Burns’ monument, Hamilton chose the Choragic Monument of Lysicrates in Athens. Completed in 1831, in 1839 it was handed over to the care of the city council, when the statue was moved due to smoke from the gasworks below discolouring the marble; Auld Reikie was determined not to be forgotten. The statue is now in the Scottish National Portrait Gallery on Queen Street.

C is for Clarinda

‘Clarinda’ was Agnes (Nancy) M’Lehose (1758–1841). She met Robert Burns in December 1787 when he was visiting Edinburgh for the second time, and they began a ‘passionate friendship’. Married with four children, she was estranged from her husband (who lived in Jamaica where he owned a plantation). She had moved from Glasgow to Edinburgh where she was supported by relatives including her cousin William Craig, a lawyer and judge.

It’s thought her and Burns’ relationship wasn’t sexual – as a married woman she had too much to lose. Burns managed to get one of her serving girls pregnant – perhaps a sign of his frustration at this state of affairs. When he left Edinburgh they wrote to each other, and it was her idea to use the ‘Arcadian’ names of Clarinda and Sylvander. He wrote several poems to her, which don’t rank amoing his finest.

They last met in December 1791. She was about to sail for the West Indies to attempt – vainly, as it turned out – a reconcilation with her husband. By then he was married, and living in Dumfries where he worked for the Excise department. On the occasion of their last meeting he wrote for her ‘Ae Fond Kiss’.

D is for Dùn Eideann

Dùn Eideann is the Gaelic name for Edinburgh. A Gaelic speaker who lived in the city was the poet Donnchadh Bàn Mac an t-Saoir, whose name is anglicised as Duncan Ban MacIntyre (1724–1812). From Glen Orchy in Argyll, he worked there and in Perthshire before settling in Edinburgh in 1767 where he served with the City Guard. He is buried in Greyfriars Kirkyard.

Among his poems is ‘Oran Dhùn Eideann’ (Song to Edinburgh), which praises many aspects of the city: soldiers, ladies, and judges; lamps, bells and coaches; the castle, palace and infirmary. Below is the opening verse in Gaelic and English (translated by Angus Macleod, in The songs of Duncan Ban Macintyre, 1978), and I’ll add a link to a now digitised earlier edition of his work published in France.

‘Tis in Edinburgh city
I would rejoice to be—
a bountiful and spacious place
that pleased in all respects:
garrison and battery
and ramparts all compact;
great buildings and a castle
where oft the camp has stayed.

When Gavin Douglas (1474–1522) translated Virgil’s Aeneid into Scots – ‘our awyn langage’, as he put it – in 1512–13, he was Provost of St Giles in Edinburgh. Soon after it was completed came the disastrous Scottish defeat at the Battle of Flodden, and Douglas spent the rest of his life involved in political intrigues. He died in London, where his Eneados was published thirty years after his death. It was the first complete translation of Virgil’s work into a northern European language, and was extended by Douglas’s own prologues; Ezra Pound reckoned it “better than the original, as Douglas had heard the sea”.

From its founding in 1128 until its amalgamation with Edinburgh in 1856, the Canongate was an independent burgh. Its Latin motto, SIC ITUR AD ASTRA – ‘thus one travels to the stars’ – was taken from the Aeneid. Virgil’s epic tells the story of Aeneas, a Trojan who is destined to found the imperial city of Rome. The phrase comes in a section which describes the God Apollo descending to praise Aeneas’ son Iulus, who has distinguished himself in battle. Douglas’s version runs

F is for Finlay 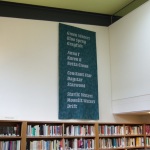 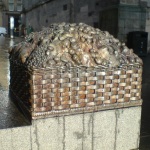 Ian Hamilton Finlay (1925–2006) is a poet best known for his garden, Little Sparta, south of Edinburgh in the Pentland Hills, made with his wife Sue. It is a small piece of the world dense with resonances and echoes, especially of the absent worlds of the sea and classical antiquity. Finlay made several works for sites in Edinburgh. A tapestry of the poem ‘Green Waters’, made of fishing boat names, hangs in the Scottish Poetry Library, while ‘Coble’ can be found in the The Scottish Parliament; bronze baskets of northern and southern fruits with accompanying quotations can be found in Hunter Square, by the Tron Kirk on the High Street; and his memorial to Robert Louis Stevenson, ‘A Man of Letters’, is in Princes Street Gardens.

G is for Golden

In 1965 James T.R. Ritchie published Golden City, a follow-up to his earlier collection (and film) of Edinburgh children’s rhymes, songs and sayings, The Singing Street. He writes in the Prologue to Golden City that “I made it a rule never to take any rhymes out of any book, only to note down what I heard by word of mouth, and from the pupils of this one school.” (The school was Norton Park School, just off Easter Road.)