Described on his grave memorial as ‘the celebrated Celtic bard’, Donnachadh Mac An t-Saoir (1724–1812) spent much of his long life in Edinburgh. Known in English as Duncan Ban MacIntyre, he moved from Breadalbane to Edinburgh in 1767, and was employed, like many Highlanders in the city, as a member of the City Guard. His wife ran a pub in the Lawnmarket. They lived in Roxburgh Close, off the north side of the High Street, where this plaque remembers him. 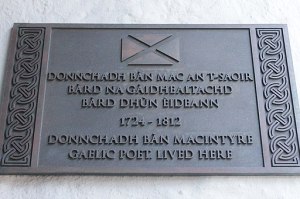 Illiterate, he nevertheless published three editions of his poems as Orain Ghaidhealach (Gaelic Songs) in 1768, 1790 and 1804, assisted by his friend the Rev. John Stewart, ministers being at the time often the only people fully literate in Gaelic. Each edition was funded by subscription, and MacIntyre travelled across Scotland to persuade, with some success, potential readers to sign up.

Additional poems were added to second and third editions. ‘Oran Dhùn Eideann’ (Song to Edinburgh) first appeared in the third edition, and sings the praises of the poet’s adopted city. Below is the poem’s penultimate stanza in Gaelic, then in English and French (translated by, respectively, Angus MacLeod and Donald James Macleod).

Edinburgh is beautiful
in many diverse ways;
there is no city in this realm
but would yield it precedence.
How many men I could tell of there,
who would give others fee,
while gentlemen slake their thirst
by drinking Spanish wine.

He is buried in Greyfriars Kirkyard.